User can customize handwheel button functionality. This can be done by configuring the Handwheel.txt file.

First, create a blank Handwheel.txt file and place it in your TNG profile root folder. You can create such file with any text editor. How to configure this file will be described further in this document.

Best to describe it is by using illustrated view: 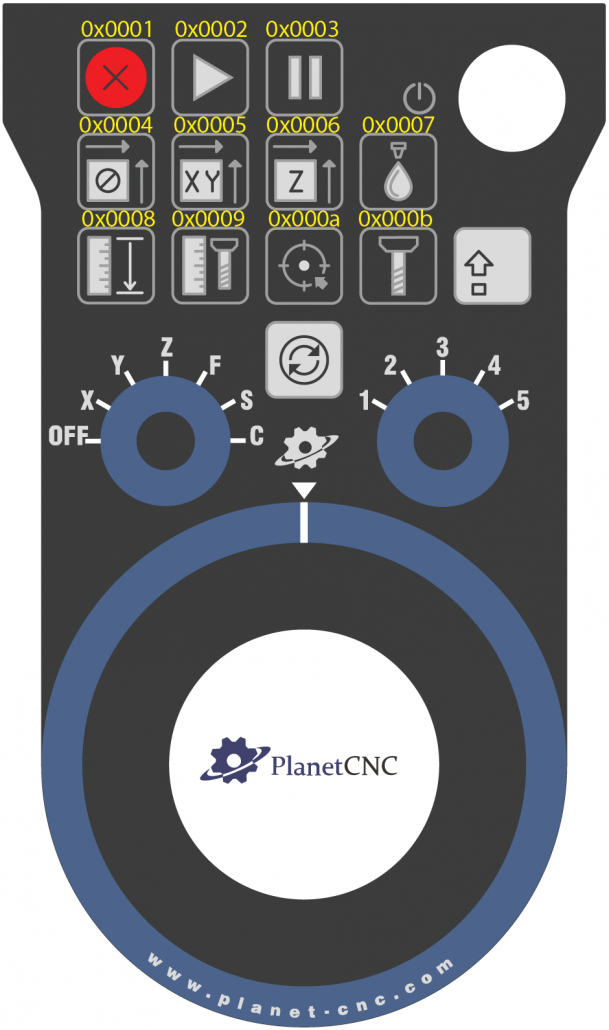 While holding SHIFT button, each buttons is now represented with the Upper HEX value: 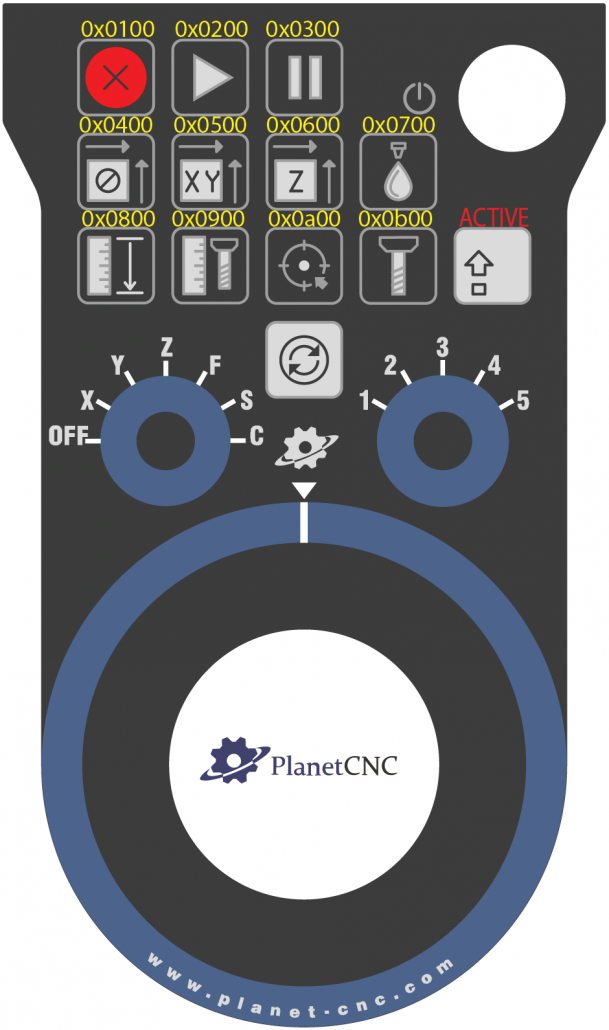 Now that we know LOWER and UPPER values of each button, we can easily assign new
alternative functions of the handwheel buttons.

Earlier chapter can be better described with the actual command lines of the configuration
file.

Below are a default* program functions that will be executed when corresponding
button will be activated:

*(Note that this is a default behaviour of handwheel buttons. No configuration file or
configuration of it is needed to obtain it… )

So if user wishes to add an alternative functionality to a button, all it needs to be done is to add a line which would execute desired program function.

Upper HEX value of button should be used.

Example:
We would like to execute Surface Measure procedure when we press the Start button in combination with SHIFT button.
Since we will assign an alternative button functionality we need to obtain the Upper HEX button value.

Earlier chapter with the layout illustration gives this information → 0x0200

Cmd line is usually the menu path of the program function. In this case this would be:
Machine/Measure/Surface

Note that path menu levels are represented with “.” and spaces in the program function name with “_” character.

Command line that would help us achieve this is: cmd: “Machine.Measure.Surface” “” num=0x0200

If we would like to turn ON/OFF Output 1 with the same button instead, we would write: cmd: “Machine.Outputs.Output_1” “” num=0x0200

Since there are not enough buttons for every possible function of tool that TNG offers, macros can be created. Macros are able to execute program functions, expression
functions, parameter manipulation etc. They can be navigated and used trough the Custom menu.

How to create a macro:
Just as we added command lines for button alternative functions to Handwheel.txt file, in the same way we add dedicated lines to create macros.
We will demonstrate three examples of macro use. Macro for program function, program function with parameter manipulation and expression function.

cmd: “File.Open_…”
Like before, command line is the path of the program function, File/Open

“Open file”
Macro will be displayed under this name in the custom menu.

cmd: “Machine.Output_PWM”
Like before, command line is the path of the program function, Machine/Output_PWM

“PWM”
Macro bill be displayed under this name in the custom menu.

param=0|10|0|100
These are definition values of PWM signal that will be changed trough this macro. So, when the PWM signal will be modified, if will consider these definitions:

expr: “exec(‘#Message’)”
Since exec is an expression function, we need to use expr command at the beginning of the macro line. exec command will execute the #Message function located in our Expr.txt file.

In this case, #Message function looks like this:
#Message
exec(msg(‘Handwheel function trigger’));

Macro bill be displayed under this name in the custom menu.

At first, display will show current jogging mode info. If the handwheel encoder is rotated custom menu will be displayed.

As per our configuration, three macros will be available for selection. Using a handwheel encoder, user can navigate trough the menu items:

To execute the Open File or Message macro, macro should be selected in the menu and confirmed with Cycle button:

To execute PWM macro, we select it in the menu and by simultaneously using a Shift button and an encoder wheel we can change the PWM duty cycle value:

To actually set PWM on the output pin, we just need to confirm it with the Cycle button: